In January 2010, a nasty looking low pressure system formed in the Pacific, seriously threatening our first expedition of the year. If this had been a weekend of diving in our home base of Puerto Galera, it would have been a simple choice to just walk away from it all, however, we were essentially fully 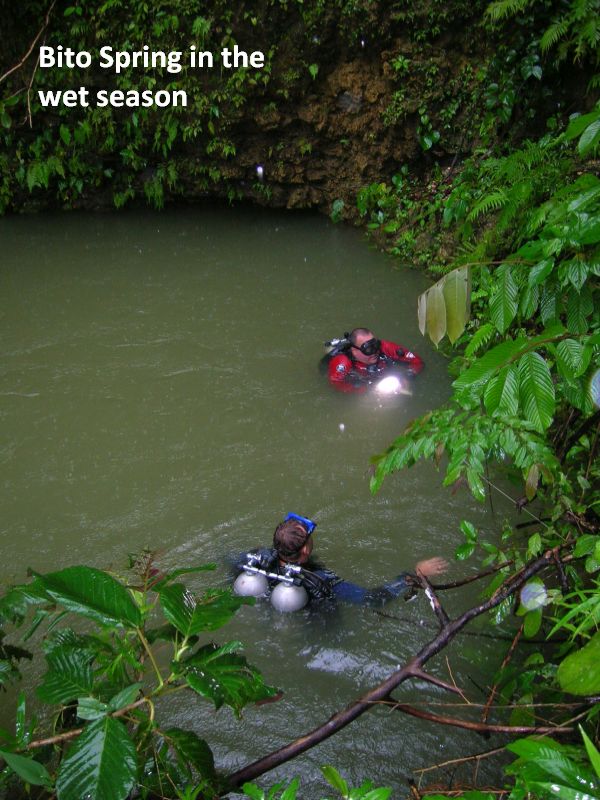 committed to this trip to Samar. The three of us had already made gaps in difficult work schedules, bought flight tickets, and hired a vehicle and driver to move gear, tanks, and compressors for the long journey South. Various local information sources with vested interests (like guide fees), and therefore a very flexible approach towards the truth, indicated that on the ground, conditions were acceptable—so we made the decision to push ahead. The agenda for this trip included working further on previously scouted caves; plus, Joni Bonifacio had found some new areas he felt held promise, so we had a few options to keep us busy.

We had a lead on the east side of Samar’s mountains, where the Pacific weather systems can make their presence strongly felt. On Day One, less than ten miles inland from the Pacific Coast, the rain pelted us as we neared Joni’s first target, a river head in a nearby Barangay called Binaloan. From the base of a thirty-foot cliff, muddy green water fountained out of what seemed like two separate sources causing very large boils on the surface. Having bounced over two hours’ worth of mud potholes to get here, valor got the better part of discretion and together Ralph and Steve entered the quieter looking of the two boils to try and see where all this water was coming from. Once they got into, and slightly under the water they didn’t see anything of course, and the presumed spring blew them out backwards into the river, ending the day's work with a “let’s come back in the dry season” entry in the trip notes. That was Goodbye Eastern Samar, but what now? 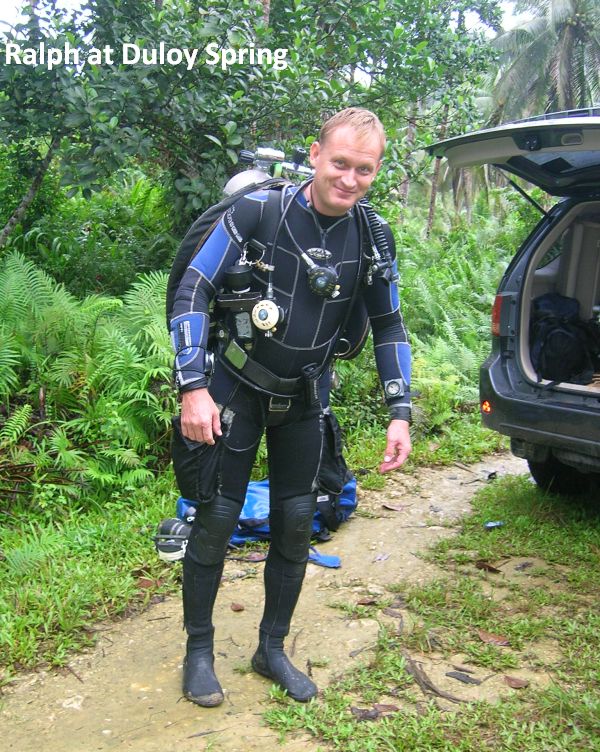 Fortunately the west coast weather wasn’t nearly as bad, being in the rain shadow of the mountains. Besides further diving at Duloy and a beautiful new location called Timogbong, we had unfinished business at Balogo Spring. We managed three days of interesting diving there before everything went the way of the unexpected. Balogo is a friendly Barangay. Here, the Captain had always been been always pleased to see us and provide manpower and river boat transport. With his daily help we discovered the cave at Balogo Spring to have two diveable passages and were feeling pretty happy with the progress. The passage on the left had gentle flow and began to narrow down after about 90m/300 feet. The right hand passage required a short scramble over a dry cave section that led into a large muddy air chamber. Porters were able to make it this far, and after clambering over and entering the water on the other side, another 90m/300 feet of line was placed. However, due to the poor visibility, it really wasn't fully understood whether this was a separate passage or a meandering journey around a very, very big room.

Day three brought the surprise, and not a good one. The dive team geared up inside the air chamber

in the right-hand passage. They were ready to investigate the tunnel more fully when the Municipality's water engineer appeared on scene outside, furious, demanding the divers come out and go with him to the police station to be arrested. The spring source for these tunnels was actually a water supply for a very large area and although we’d followed all local advice not to dive on days they were pumping, he was incensed that nobody had told him anything about our activity and he clearly felt his authority was being undermined or disrespected. Our guide Joni swam in to tell the divers what was going on at the cave entrance, but since it was clear the engineer wasn’t going to come in and get them, nor knew if they were already underwater, they dived anyway. By the time they surfaced two hours later, he had long since got fed up with the wait, the heat, and the bugs and left for home. In spite of that, it was very clear that the right thing to do was report to the police and the Mayor to explain ourselves.

After discussing our purpose with the police and authorities, they were fully reassured we weren’t doing any harm, nor did we have ulterior motives such as pulling out Japanese treasure. Still, the Mayor wanted a formal presentation given to all his assembled councilors on the nature of cave diving and its possible benefits to his Municipality. However, to this day we’ve yet to get them all in the same place to listen and from a diving perspective the cave has been gathering cobwebs ever since. Overall this was a good learning experience without too much harm done. It reinforced that we needed to talk to absolutely everyone up and down the chain of authority before diving anywhere new, not just the local Barangay, to avoid unwanted headaches.

No doubt Balogo has something to offer, a lot of water flows through it's conduits, but the turn of events has been such that other discoveries with (generally) less problems have kept us completely busy until the present day. Later in 2010 as Eastern Samar cleaned up and became the main focus, some very impressive finds and results started to unfold. More to follow...