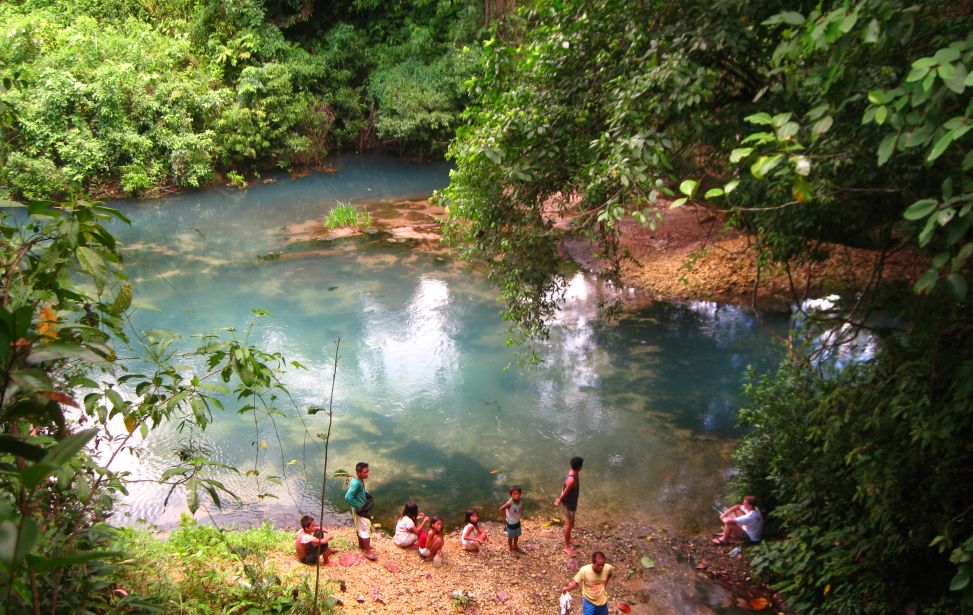 Moving into Summer 2010 we put most emphasis on Eastern Samar, but still followed a few leads in the west. The western points of interest were located in areas with outstanding natural beauty, such as Timogbong, but for one reason or another, all turned out to be dead ends. The whirlpool of a 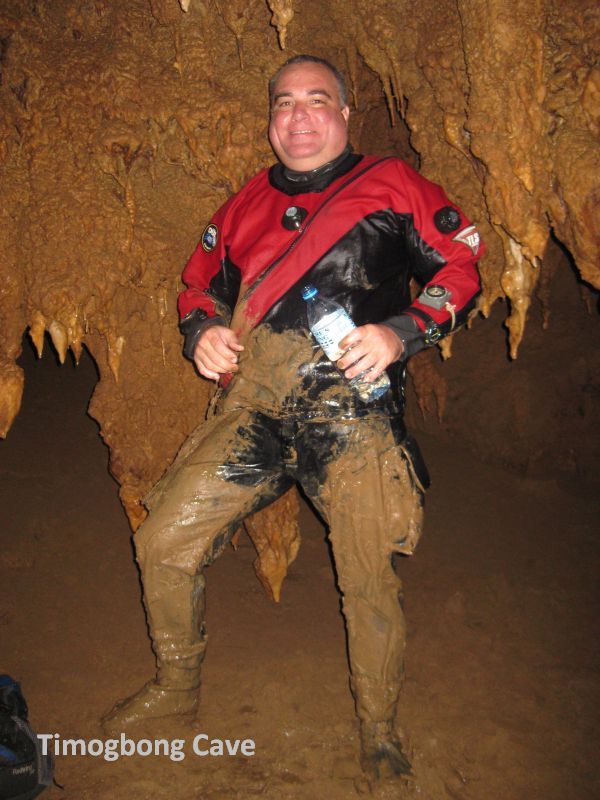 riverhead near the east coast that we’d seen first in January, named Bito, had undergone a radical transformation (seen above) over the past few months. We found the water level three meters lower, with relatively no flow and with workable visibility. The long daily drive from Catbalogan City, where we had our compressor, proved worthwhile as the spring immediately gave divers Ralph and Steve a large going passage. This wonderful find of a cave though, gave a problem when the main conduit took a vertical nose dive from ten meters to at least 42 meters deep not more than 60 meters from its entrance. The only gas available to us was prefilled 32% from Puerto Galera or air that we could fill in Samar, so for the moment things had to pause.

This cave and the week ahead needed a rethink. Fortunately, Joni Bonifacio’s jungle telegraph provided us with news of another spring in an even more remote village called Concord. Far, far down a rough dirt road we came upon the village, crawling with curious children and soldiers. The team was led through beautiful forest to a picturesque riverhead, which the local men could only say was " deep". The Samar unit of measure is arm spans, and they assured us that it was fifty of them. We lowered a weight on a 45m spool and couldn't feel a bottom, and put in a dive to 30m on the back wall of the head pool but still had no clues where the very large volume of water was coming from. Dave Ross had missed this trip, but started to get nightly text updates from Catbalogan City telling him he better get on to his network of gas suppliers and find a way to get helium and oxygen into the jungle in quantity. 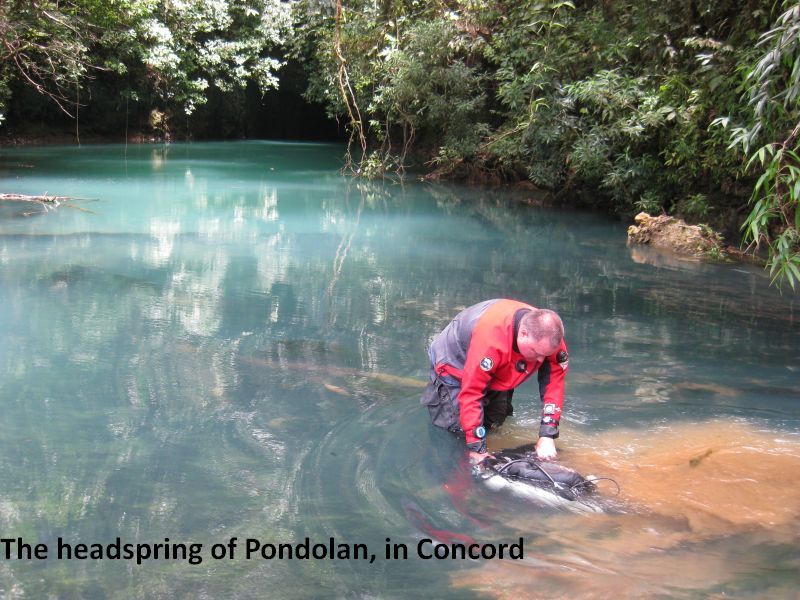 This took about two months to arrange, and in late August we were back on scene. Or rather, Dave was there on time with a truck full of gas while Steve and Ralph missed their flight; they blame the airlines for a last minute gate change, but all real signs point to a case of too much excitement and too many liveners in the departure lounge and not listening to the updates.

A day later when things did come together, Bito was the first target. Happily, the main conduit went no deeper than about 42 meters for the time being and the cave extended to a length of almost 180 meters. Progress though was slowed by conditions—which were manageable at about five meters of visibility—but the passage diameter was bigger than the distance we could see,, making it another case where discerning its true direction and the way forward were very difficult. Sensible gas management rather than depth limited this dive for the time being. Concord was also given a revisit and the head pool probed to 54 meters with no sign of a bottom or source of its substantial output of water. At the time it was tremendously exciting to think about what might be feeding this very large river spouting out of a hole in the ground, but the remoteness and depth would have created some big logistics problems. In 2018 we learned much more about this area, but at this point in time, it was done. 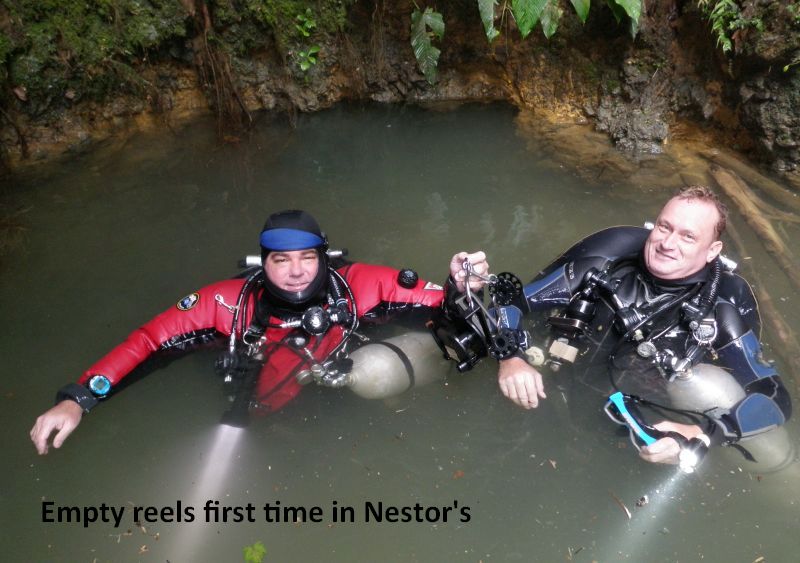 So three days into this trip and we were at a point where our two primary targets already proved to require more sophisticated diving than we were in a position to undertake. The project now needed proper set up, full support divers, and more tanks than we’d been able to bring with us. One other door was opened though. While Ralph and Steve were doing a deep Bito dive, one of the older porters, a man named Nestor, had mentioned he had a spring on his land, so Dave had trekked through the forest with him to have a look. In a low valley, a muddy banked puddle, only about five or six meters across with freshwater shrimps scuttling around presented itself. From the surface it didn't look inviting, but Nestor knew there was an opening a few meters down and that the valley flooded and drained through this sink in the wet season.

We’d seen many things like this before and none had gone anywhere, but for want of a better option we filled tanks and made the 2.5 hour drive back the next day, hired Nestor and some extra porters, and set off to find out. Steve and Ralph eyed the dive site without a great deal of enthusiasm but geared up, slithered in, did an S-drill, tied off on a log, and submerged. After a couple of minutes, their bubbles faded, disappeared, and didn’t reappear again for almost two hours, to the curiosity of all the onlookers. They had huge smiles when they surfaced with all reels empty and approaching 460 meters (1,500ft) of line laid in this unassuming-looking cave soon to be named “Nestor’s.” This was a genuine breakthrough and beyond all expectations. The long, shallow passage, in just one day’s worth of work, became the longest known flooded cave in the country. Helping to assure unhindered further exploration for us was the fact that the Barangay Captain in this area was supportive of us and took a keen interest in our diving activities, usually appearing on site every time we had divers in the water.

We now faced just one last problem, and it may sound like a stupid one. This trip’s diving could go no 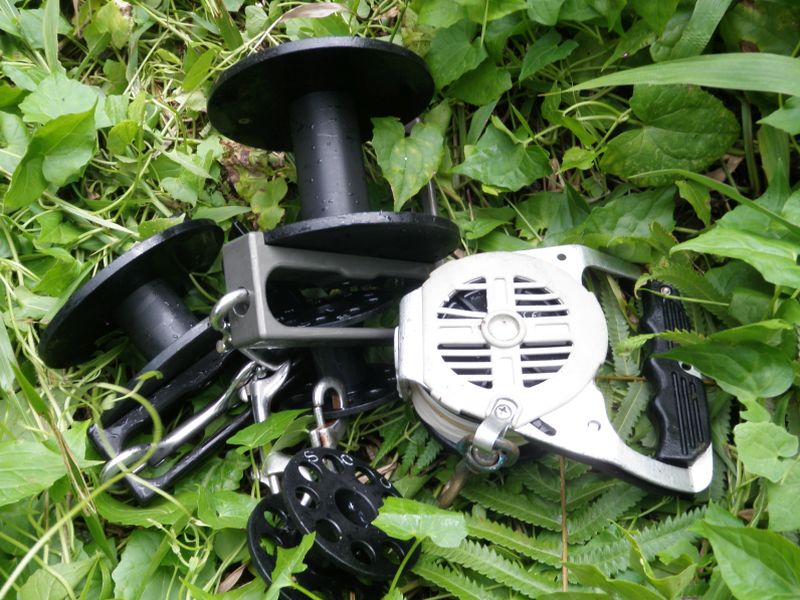 further, not because of caves pinching down, political barriers, depth or proper gas, but because of simple lack of cave line. Ours was all used up, and the nearest resupply was two days’ travel away in Puerto Galera. We were so used to laying 40-50 m of line here and there that to suddenly use ten times that amount of it in two days was something we’d never envisioned!

Looking towards 2011, we were in very good spirits about what was potentially to come; all our efforts were paying off. But for one reason and another—being practically arrested at Balogo and losing easy access being one of them—we kept our finds largely out of the public eye. Since that incident we’d put more and more energy towards covering all bases with local authorities, and with so much potential at Bito and Nestor’s, we didn’t want anyone unaware of local protocols to barge in and upset someone that could get us all thrown out. So, quietly and privately, we set about preparing for the diving season ahead. 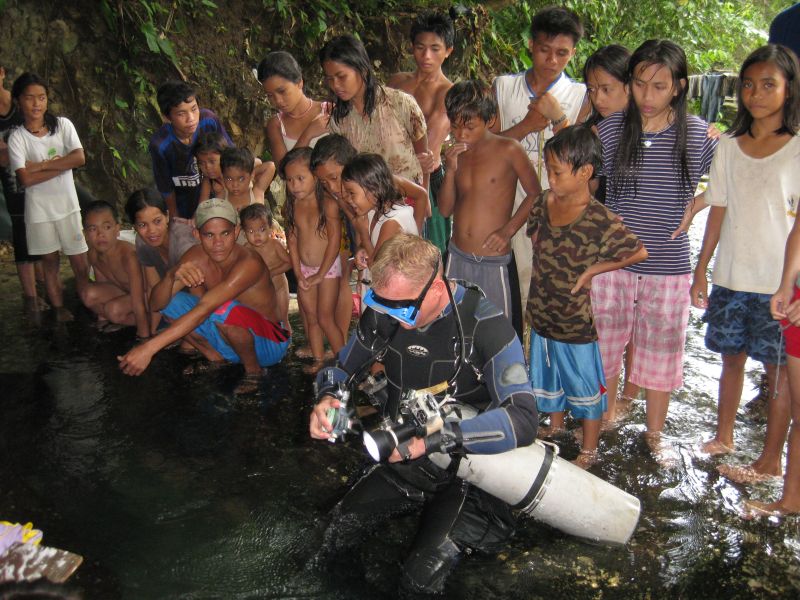